The solar system bubble looks like an object from a science fiction movie!

Humans have only sent two objects beyond the edges of the solar system, NASA’s Voyager 1 and Voyager 2 probes.

And outside the heliosphere, the interstellar space extending between stellar systems is a space bubble created by the sun.

For years, astronomers thought that the heliosphere looked like comets, and had a long tail that forms a shield that blocks the cosmic rays coming from outside.

But the shape of this wrapper may be much stranger, according to new research, as it appears to resemble a hollowed-out croissant, according to a NASA statement. It is not like a comet, it is more like chewing gum, or a strange living creature from a science fiction movie.

A team of astronomers examined the data collected by the NASA Interstellar Boundary Explorer. The mission analyzed the neutral atoms active when the cosmic rays traveled from the sun to the heliosphere, which is the theoretical limit that the solar wind does not penetrate, billions of kilometers from Earth.

The team also looked at data from charged particles reflected towards the inner solar system, taken from the Cassini mission and NASA’s New Horizons mission. And astronomers found that the further the solar wind was from the sun, it interacted with more materials in interstellar space.

The team then began work on creating a 3D model of the heliosphere, and detailed this in a research paper published in the journal Nature Astronomy.

Knowing the shape of the heliosphere may be useful in discovering the possibility that other star systems could be shielded by a similar bubble, to be able to house living creatures. The heliosphere prevents most of the galactic cosmic rays from reaching the solar system, and the rays that do arrive can be dangerous, especially to astronauts.

Astronomers hope that the next NASA mission, the Interstellar Mapping, and Acceleration Probe, will help provide additional information about the actual shape of the heliosphere surrounding the solar system. The probe, due to be launched in 2024, will try to study the behavior of energetic particles and their interactions with the solar wind.

(“The magnetic bubbles could be our first line of defense against cosmic rays,” points out Opher. “We haven’t figured out yet if this is a good thing or not.”

On one hand, the bubbles would seem to be a very porous shield, allowing many cosmic rays through the gaps. On the other hand, cosmic rays could get trapped inside the bubbles, which would make the froth a very good shield indeed.

“We’ll probably discover which is correct as the Voyagers proceed deeper into the froth and learn more about its organization1,” says Opher. “This is just the beginning, and I predict more surprises ahead.” Author: Dr. Tony Phillips | Credit: [email protected]) 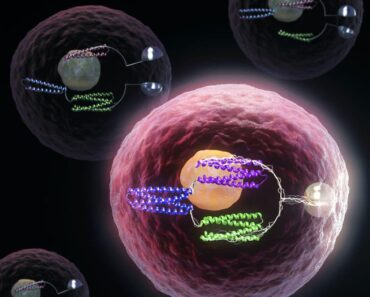